Lafité IV 15.6" w/ Arch Linux | PCSPECIALIST
Menu
Log in
Register
You are using an out of date browser. It may not display this or other websites correctly.
You should upgrade or use an alternative browser.


Form factor
The shell is mixed aluminum and plastic, sturdy and lightweight. Its thin and light design makes it handy to carry with just one hand. Good build quality as far as I can tell.

Keyboard
The keyboard backlight is shiny and extremely sophisticated, you can definitely tell that the target market is gamers (even though this particular model doesn't offer gaming-grade graphics cards). With a bit of tuning it can be configured to look more professional, even on Linux. The keyboard features a numeric keypad: as a consequence, the position of the keys takes a little getting used to, everything feels a bit shifted to the left. The right shift key is much shorter than you'd find on a normal keyboard, because it needs to make room for the arrow keys.

The Caps and Num lock keys have no visual feedback so you can't easily say whether they're on or off by just looking at the keyboard, which is slightly annoying but not a huge deal (you can set up software notifications in your desktop for those).

Touchpad
The touchpad is at the centre of the laptop. Since the keyboard is a bit shifted to the left, the central position makes it more likely that you'll accidentally tap the touchpad with the left part of your right palm while typing. The driver has a feature to disable touches while typing, which I found a must; with that turned on, the user experience is much better.
The fingerprint reader is embedded in the top left corner of the touchpad, which is a questionable design choice as it makes that corner of the touchpad unusable. It's not a big deal either way, but since I was not interested in the fingerprint reader, I would have appreciated if it had been optional (the laptop shell manufactured by Clevo does have a variant without the fingerprint reader).

Screen
The screen is nice, with decently-narrow bezels and a good look and feel overall. The anti-glare feature helps in situations where there's a lot of external light, but it's far from being a panacea. Luckily the screen backlight has a broad intensity range, which also helps.

Ports and connectivity
This is where the laptop really shines. It's incredible that they managed to put so many ports in such a slim form factor. There are

Overall, great use of the real estate (I particularly appreciated the RJ45 solution which has a slimmer socket than a full-size RJ45 connector, but expands when you plug the cable in). The "barrel" port for the charger is a bit of a pity, I'd have preferred an additional USB-C / Thunderbolt port, since the laptop does support drawing power from USB-C. The camera is of acceptable quality, I wish it were a bit higher resolution, but it's more than enough for the occasional videoconference.

BIOS
Bios is Insyde H20 version 1.07.07TPCS2. It's pretty stripped down to the bare essentials, but the most useful options (at least to me) are available:

* Enable / disable Secure Boot, Trusted Platform Module, and Soft Guard eXtension
* SATA controller mode (it's important that this be configurable in AHCI if you plan to install Linux)
* Enable / disable Flexicharger (this is a good option to improve battery life)
* User and Supervisor passwords
* Thunderbolt "native OS" security settings (none / user / secure connect / DisplayPort only)
* Digital Display Interface (DDI) can feed from either the mini-DisplayPort (mDP) or the Thunderbolt port (TBT)

The last bit is particularly helpful if you're scratching your head trying to figure out why a display attached to a Thunderbolt adapter (or dock) isn't being properly detected (Linux or Windows makes no difference, the firmware is just not sending the DisplayPort signals).
It took me hours to figure out that the BIOS setting "DDI to TBT" was needed to get the display properly recognized (the obscure three-letter-acronyms didn't help me connect the dots).

A note about Thunderbolt security: this laptop is reported "Partially vulnerable" to http://thunderspy.io (see spychecker-linux). There doesn't seem to be an option in the BIOS to completely disable Thunderbolt, so kernel DMA is probably as good as it gets.

Service
PC Specialist has been very professional handling the order throughout. My order took a bit to build and there were additional delays due to temporary unavailability of some components, but they were very forthcoming and transparent throughout the process, which I really appreciated.
The packaging was really good. Not only was it anonymous (you couldn't tell the content from outside), it was also very well padded. The screen even had a sleeve of transparent film to prevent dust from transferring from the keyboard. The packaging also included plenty of documentation, both in paper form and digital, even though the digital content is in CDs, and this laptop doesn't have a CD reader I haven't looked into the CDs but I guess there's nothing in there that you can't download from the PC Specialist website anyway, so no big deal either way.

Software specs:
Neofetch can say it better than I can

Code:
The installation of Arch Linux was seamless and, as others have noted, most things work just out of the box:

The fingerprint reader is not working and, according to hw-probe, doesn't have a driver at all in the Linux kernel. I haven't tried it on Windows.

Overall rating
I am really pleased with my purchase. It's great to have a system where you can really feel you're not paying for something you're not using, customized from the ground up. I would definitely recommend this laptop to any Linux user who doesn't have gaming needs.

And now, without further ado, the pictures. 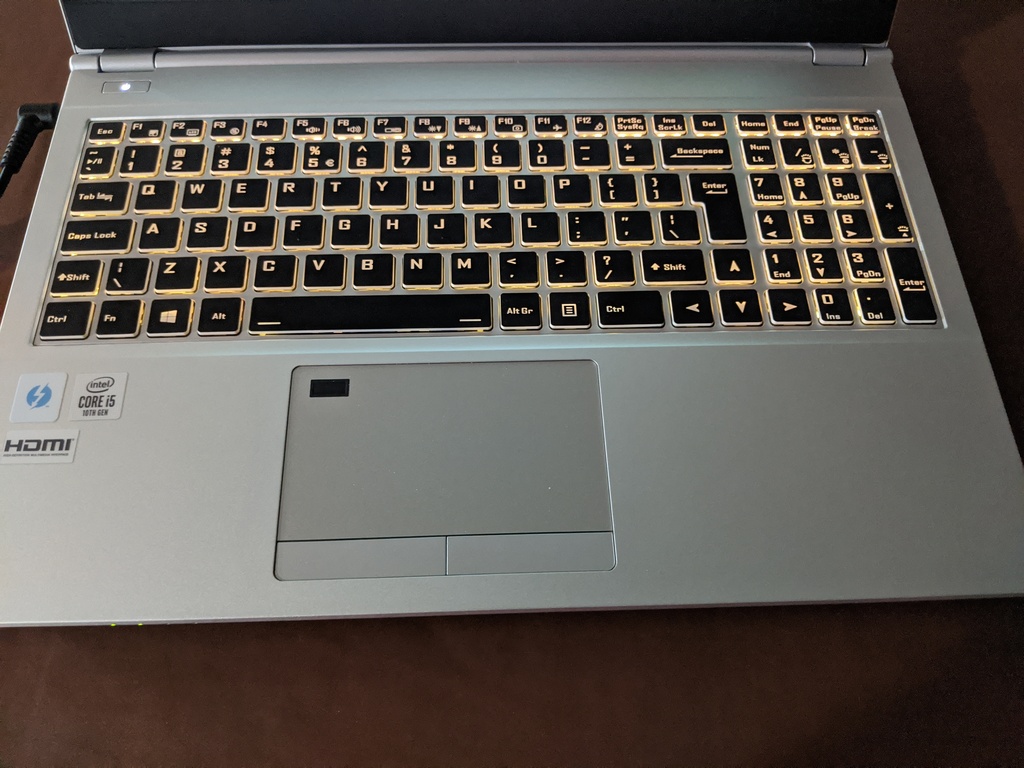 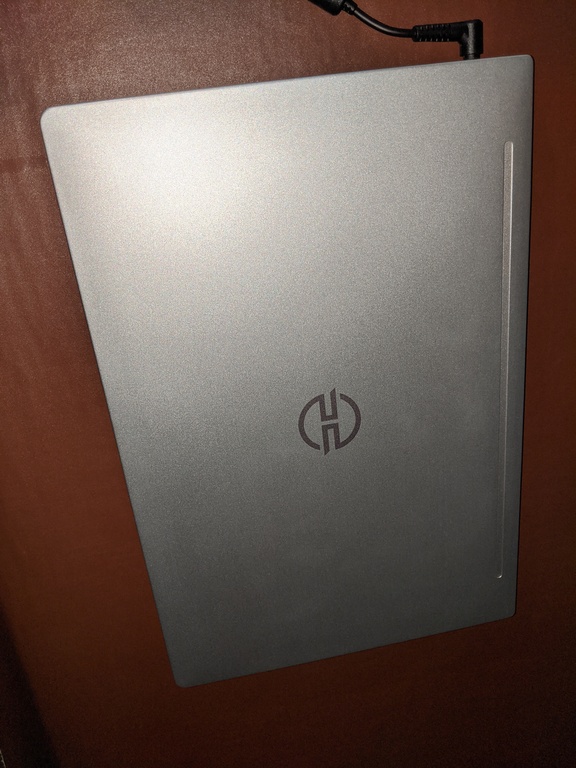 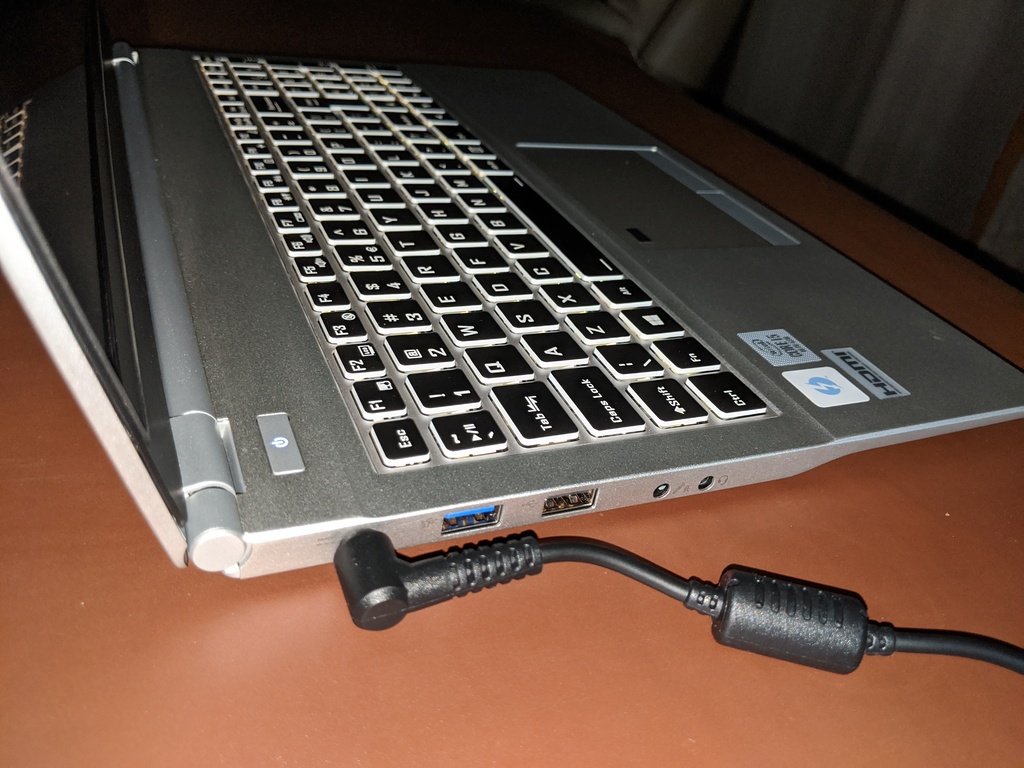 Moderator
That's a great review, thanks very much.